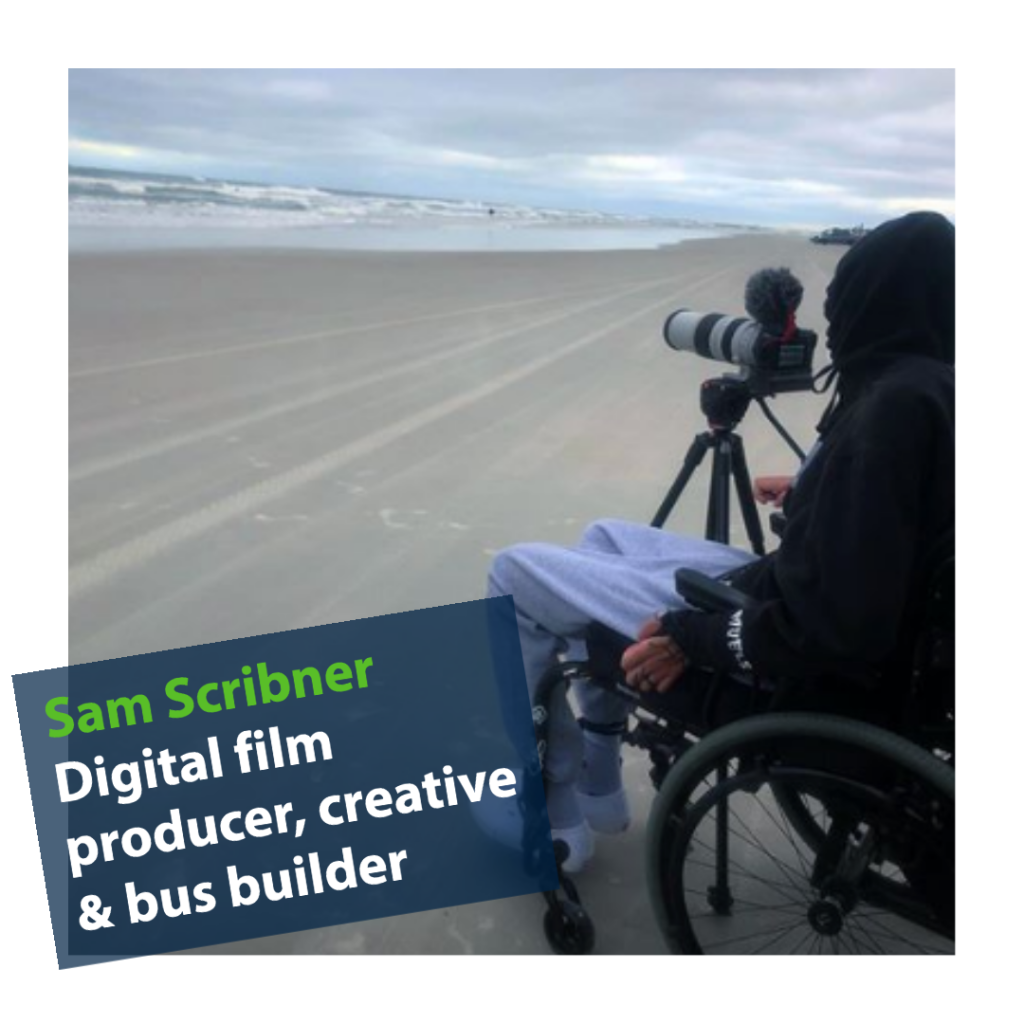 Creative, Sam Scribner shares his journey as a digital film producer & bus builder all the while overcoming SCI

Please share with us some insight on your disability?

So a little over four years ago I was over at a buddy’s house, horsing around on a typical Friday. I was in a hammock.  I went to get out and my feet went overhead, kind of like a scorpion scenario and I ended up breaking my C5 vertebrae. Total freak accident. Whenever I tell the story, I always think back to all of the really dumb things that I’ve done in my life thinking, “Wow, that could’ve been pretty bad” then got up, and walked away from. Then one mundane evening a hammock nearly took my life.

You seem very creative, video production/photography etc…  Where did those inspirations come from?

Thanks man, I really appreciate it! Honestly after the accident I had no creative outlet whatsoever and it ate at me. I used to play the drums & the guitar and surfing and skating were very much a creative outlet for me too. With all of that taken away I didn’t really know what to do.

How has your disability affected your creations, both in terms of your inspirations and ability to create?

With function taken away post injury, I tried to use a brace to start drawing.  I really respect the people who have taken the time to master the craft post injury or just the folks who lack dexterity. I’m a high-level quadriplegic so I don’t have any hand function.  In the end, it was just too tedious.

So, I started picking up my phone and using its camera to film my friends surf and skate. After I got a taste of indulging in creativity again I purchased a GoPro that has voice activated recording features and started teaching myself Adobe’s video editing software via YouTube. Eventually I bought a camera, I have a pretty cool rig now that hooks my camera to my chair, I have just recently completed a Digital Cinema Production course at a local technical college, and now I’m a Certified Adobe Associate.

You seem to have a supportive family and clique.  Talk about their contributions in this process.

I was able to notice pretty early on how good I had it with the help that I had/have. My folks stayed with me for the first few weeks in the hospital. The nurses and doctors would always tell me how fortunate I was. I always believed them when they told me, but after being in the situation for a little over four years now I’ve been exposed to the healthy proactive people living with SCI and I’ve also seen people deteriorate. It’s an interesting balance to try and achieve, but you need people around you who are going to challenge you. More often than not my family members help me complete a task when they see me struggling. How lovely right? Well, if I don’t struggle and problem solve, I’ll never learn how to complete tasks which in the end is just enabling my dependence instead of fostering my independence. I was having a rough time with caregivers which I’m sure a lot of you know a lot about. They’d just not show up and thank god I had mom and dad to step in because if they hadn’t I’d be stuck in bed until the agency either sent a replacement or the caregiver finally decided to show up. I probably went through 10 to 15 different caregivers and after my sister had heard enough about it she decided to quit her job in New York and move home to become my full-time caregiver. When I was in school she would drive me down to school every day, we would eat lunch together, discuss our day together, and then she’d help me get into bed so we could turn around and do it again the next day. Her help throughout the past few years has given me the confidence and knowledge to know I can handle anything thrown at me.

What is one piece of information you’d like to pass along to the community who might not be as familiar with people who live with disabilities?

If you’re going to stare at least ask questions. Far too often in public I catch  someone gawking. It doesn’t have to be anything direct, maybe even just start up a conversation. I know it’s difficult because you’re not exactly sure how everyone is able to communicate, but I can tell you 10 out of 10 people will appreciate you being yourself.

How has your disability made you a stronger person?  Can you also elaborate as to how your involvement in the community changed your perspective?

My disability opened me up to the world of disabilities. It sounds silly, but when you’re a 22-year-old guy you just kind of lump everything together with wheelchairs. I’m in a fortunate situation where I live near some really great facilities that specialize in activity-based therapy for people living with spinal cord injury. I had absolutely no idea that this world existed, that there were facilities out there specifically to help those injured, or even that they were five minutes down the road.

Of course the physical therapy is monumental to my progress towards independence, but getting out and associating with other people in wheelchairs, other young people coping with being paralyzed, and getting advice from those who have lived this life longer than I have really helped me emotionally. There’s just so much information out there that you can feel very overwhelmed trying to figure out this new life, but most everything I’ve learned has come from somebody living in my situation or something like it.

Living with a disability, adapting and becoming your best self is never a straight path, do you care to share a brief transformative or light hearted anecdote from sometime in your process?

You certainly aren’t kidding there. When I first came home from the hospital nothing in the house was ADA, but the bathroom was especially tiny and there was no way a wheelchair was getting in there. So for probably the first month or so of me being home I was showering outside with the hose for everyone to see. I remember it being pretty humiliating at first, but after a while of living in this lifestyle you lose your shame. You realize: “Yeah, people are going to stare, yeah, you’re probably going to feel in the way sometimes, and you’re more than likely going to have to deal with awkward situations.” With all of that being said, I think the best thing about being in those situations, is that they happen, because now I can look back on it and see how much progress I’ve made. Eventually it was remodeled, but I’m sure I gave the neighbors quite a view.

What has been your proudest moment in this process?

In 2017 I started an apparel line as a creative outlet.  In January 2018 I held a skate contest, and held a video premiere of a project that I fully produced. It was awesome to see my friends and family come out to support me, but it was most validating to see people I didn’t know previously supporting the brand.

Anything else?  Anything you want to promote?

My sister and I are currently renovating a 36 foot bluebird school bus into a fully accessible retrofitted RV. My mom is a woodworker, so we have access to a ton of tools.  My sister, doubling as my caregiver, takes me to and from school every day so she decided to enroll in a Diesel mechanic course to give us a good foundation of knowledge of the engine while we were on the road.

Our story made it onto the local news and we have had countless people reach out in support of what we’re doing, offering a hand or resources however they could. We want to  show people living with disabilities that there are alternative ways of getting out and seeing the world. I plan to do this through my videography by utilizing the techniques I learned in school. We are on a shoestring budget, but we are slowly making progress and we both couldn’t be more excited.

What impact do you hope your process/accomplishments have on people who use wheelchairs and the community as a whole?

Obviously I would like my achievements to inspire others so that innovation will continue, things will get easier, & the disabled community can in the end, be a better place. Ask questions! Everything that has helped me achieve goals that I’ve set for myself and ones I didn’t even know I had, has come from advice I have been given or advice I sought out. Reach out to people and try to learn as much as you can from the community, they’re your most valuable resource. 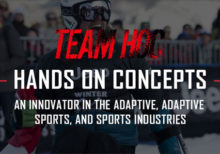 Help us fundraise for mobility equipment for those in need

Refresh Mobility is a colaboration combining nearly 40 years of experience as end users, industry executives, service providers and family members coming together  to provide equipment and information for people who use weelchairs.